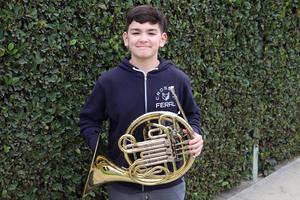 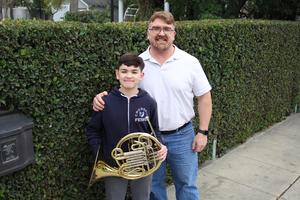 Josh Howard is a Chipman student and plays French Horn in the school’s orchestra. Earlier this year, he was the recipient of a great honor...

Josh Howard is a Chipman student and plays French Horn in the school’s orchestra.  Earlier this year, he was the recipient of a great honor when he was invited to participate in the California All-State Music Education Conference’s (CASMEC) honor orchestra.  He is one of only 16 Junior High students in all of California selected, and the only public education student from Bakersfield to participate.

“I did not want to audition at first,” said Josh, “but my dad convinced me that it was something I should pursue.”  Josh has been playing French Horn for more than four years, and this was the first time he had tried out for the state honor band. “I had to learn every requirement, which included scales, learning specific pieces and sections of pieces.  I practiced a lot to get the music down, and it took several tries to get my audition recording finished.”

Mark Howard, Josh’s father and band and orchestra teacher at Chipman was excited about this opportunity for his son, “We started the audition process over a year ago.  It is a lot of work to get those scales and music pieces absolutely perfected for the audition.  This is a huge deal and it is really amazing that he was one of the students that was chosen.”

Josh will get to participate in the CASMEC conference with the fellow honorees which will include attending top college orchestra concerts, honor band rehearsals with a nationally renowned conductor, and a final performance which will take place this weekend in Fresno at the Saroyan Theatre.

Congratulations to Josh Howard for receiving this incredible honor and good luck with your performance this weekend!